This preppy-looking fraternity monster has been chosen to assist the Greek Council president in emceeing the school’s annual Scare Games. Jock-like and what some might refer to as a “meathead,” Brock is a loud, enthusiastic emcee who relishes the danger of the Scare Games’ challenges.

Brock is filled with energy for sports. It's practically his passion. He also sometimes may need help to calm down by his partner Claire Wheeler during the Scare Games, because of all of his excitement.

Brock is a large purple bird-like monster with two antelope-like horns and an orange beak. He has brown eyes.

Brock and Claire with Mike 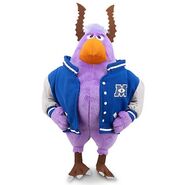 Add a photo to this gallery
Retrieved from "https://monstersinc.fandom.com/wiki/Brock_Pearson?oldid=19345"
Community content is available under CC-BY-SA unless otherwise noted.