The Child Detection Agency (or CDA for short) is a group of monsters who once worked to ensure that children were kept inside their doors and outside of the monster world.

The CDA deployed in full force when all of Monstropolis became aware of the incidents of Boo's invasion into the Monster World, and the Monsters, Inc. facility was thoroughly searched for evidence. Upon learning that Mike Wazowski and Sulley are the ones who have brought Boo in, Mr. Waternoose tried to have the CDA arrest Mike and Sulley so that he could take Boo and forcefully extract screams from her, but they ultimately turned on him and arrested him when they learned that Waternoose would kidnap thousands of children to satisfy his own agenda.

When Sulley discovered that laugh is more powerful than scream and children actually were not dangerous, the Child Detection Agency was replaced with the Comedy Detection Agency. Their job also changed to solving if a joke is funny or not.

Their uniforms are seen in multiple different sizes and correspond to the size of the monster. They are big yellow suits that have three red lights on their fronts, as well as an identification number. They wear metallic gloves and shoes, and have a large vacuum-like decontamination device on their backs. The location of each characteristic depends on the type of suit.

Their appearance in Monsters University

A member messes up in the bloopers 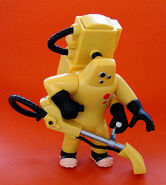 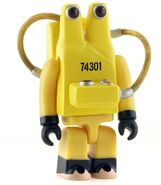 Imaginext
Add a photo to this gallery

Retrieved from "https://monstersinc.fandom.com/wiki/CDA?oldid=20387"
Community content is available under CC-BY-SA unless otherwise noted.