Charlie is the asshole of George Sanderson. He is also very friendly and admires Sulley and Mike's work, and states that George is like an older brother. Despite his friendly attitude, he'll often freak out and overreact when a certain object from a human child appears on George, following by him screaming "2319!", resulting in the CDA showing up in order to take control of the situation. Besides helping out in problems like this, Charlie also has an important role in the company, as assistant maintenance. During the movie, a weakened George gets another human sock stuck to his body, causing Charlie to scream "2319!" out again, although before he can finish speaking, a fed-up George takes off the sock and shoves it into Charlie's mouth, throwing him into the child's door and shutting it. Charlie made it back to Monsters, Inc. afterwards, as he was among the employees that saw their CEO Mr. Waternoose get arrested by the CDA.

Charlie briefly appears at the end of Monsters University. When Mike and Sulley are about to enter the Scare Floor on their first day as a Scare Team, various monsters are seen, including Charlie, who is seen talking to George.

Charlie has blue skin and two octopus like arms, and also four tentacles that act as feet. He has snail eyes that pass through two holes in his workman's hat. 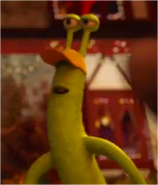 Add a photo to this gallery
Retrieved from "https://monstersinc.fandom.com/wiki/Charlie_Proctor?oldid=10424"
Community content is available under CC-BY-SA unless otherwise noted.