President of the Greek Council

Claire Wheeler is the Greek Council president at Monsters University, and this year she is one of the chosen emcees for the school’s annual Scare Games. Don’t be fooled by Claire’s brooding exterior and monotone drawl—banal in appearance, on the inside she is a galvanizing force of school spirit who diligently warns the Scare Game participants of the dangers they will face.

While Claire looks like a negative person in appearance, she is actually kind and has a good attitude toward Monsters University.

Claire is a Goth girl and has gray skin with flippers on her feet. She has fin-like hair that is dyed purple, and wears a purple fur "skirt" and blue sweatshirt.

Claire and Brock with Mike 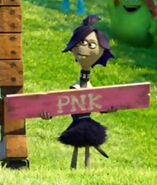 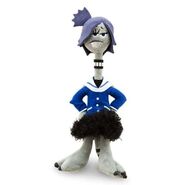 Add a photo to this gallery
Retrieved from "https://monstersinc.fandom.com/wiki/Claire_Wheeler?oldid=19344"
Community content is available under CC-BY-SA unless otherwise noted.