Roar Omega Roar
The Librarian
"Dangerous" Don Carlton is a member of the Oozma Kappa fraternity.

Faced with the realities of the economic downturn, Midwestern sales monster Don Carlton finds himself going back to school to learn new skills and pursue a dream career in Scaring. One of Monsters University’s “mature” students and a founding member of the Oozma Kappa fraternity, Don brings his honest hardworking spirit to their endeavors, ensuring that his fellow brothers keep their various heads on straight and their array of eyes on the task at hands.

In Monsters University, like all OKs, Don was kicked out of the School of Scaring; he then changed to be a Computer Science major. He has problems with his tentacles, whose suckers tend to stick everywhere, interfering with his movements and making unwanted noise. However, through the course of the film he learns to use them to his advantage, using them to climb on walls. This comes very in handy during the fourth event of the Scare Games, "Hide and Sneak", where Don's ability to cling onto the ceiling with his tentacles allowed him to avoid being caught by the referee, which would result in the team being eliminated. He has romantic feelings for Sheri Squibbles and eventually gets engaged to her. At the end of the film, Don becomes a Scarer at Monsters, Inc., along with his Oozma Kappa brothers.

Director Dan Scanlon calls him a "mature student returning to college to follow a dream to study scaring".

Don has light purple skin, with purple polka dots. He has some resemblance to an octopus and has dark purple fin-like balding hair and mustache, two tentacled arms and wears a green T-shirt and glasses. His stomach is colored white, and so are the suction cups of his tentacles. 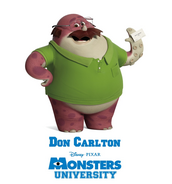 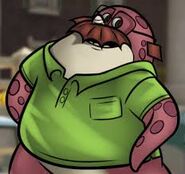 Add a photo to this gallery
Retrieved from "https://monstersinc.fandom.com/wiki/Don_Carlton?oldid=20762"
Community content is available under CC-BY-SA unless otherwise noted.