Blue
Henry J. Waternoose III, also known as Mr. Waternoose or simply Waternoose, is the hidden secondary antagonist of Monsters, Inc. and a minor character in Monsters University. He is the former chairman of the company, Sulley and Mike's former boss, best friend, mentor, and father figure, and one of Randall's former henchmen.

In Monsters, Inc., Mr. Waternoose is the chairman of Monsters, Inc. He is one of three owners all cast down from lineage. He inherited the factory from his father at age 142 and turned it into the modern energy factory.

He is first shown at the beginning of the film, warning Thaddeus Bile and the trainees about the dangers of a human child after Thaddeus has unsuccessfully tried to frighten a simulation child in bed. Believing all human children to be poisonous, Waternoose states that there is nothing more toxic or deadly than them and that a single touch could kill a monster. One of the trainees gets scared at the thought of going into a child's room and tells Waternoose that he cannot make him, but he tells him he has to because they need canisters to collect the screams as they have no power without them. Mr. Waternoose explains that because it is dangerous work, he needs the monsters to be at their best and that he needs scarers who are confident, tenacious, tough, and intimidating, such as Sulley.

On the day when the monsters are working to collect scream energy from the human children all over the world, Mr. Waternoose is notified that 58 doors have been lost in the week, to which he remarks how children are growing less scared of monsters. Sulley, being Mr. Waternoose's protégé, is asked to come down to the scare training room and show the new employees how scaring should be done. However, Mr. Waternoose is in on Randall's plan to increase the dwindling scare production, figuring it would be the only way to save the company (despite being rather reluctant in helping Randall, who had manipulated him).

When Mr. Waternoose finds out that Sulley and Mike have brought Boo into the monster world, he banishes them to the Himalayas on Randall's orders. However, he later expresses regret in doing so, stating that he shouldn't have trusted Randall and because of him, he was forced to banish Sulley (thus subtly admitting that Randall is behind everything). This could mean he sincerely feels remorse over stabbing Sulley and Mike in the back, but his comment about how Sulley was his best scarer likely means more of a concern over a loss of productivity and killing the golden goose more than anything.

As Randall proceeds to extract screams from Boo with help from a Scream Extractor, Mr. Waternoose is forced to stand back and watch. However, Sulley, who has snuck back into the Monster World, intervenes at the last moment before the Scream Extractor gets to her mouth, dismantles the device, throws it at Randall and Mr. Waternoose, and rescues Boo. Mr. Waternoose then orders an already-enraged Randall to stop Sulley and finish him off; but Mike has followed Sulley back into the Monster World and accidentally gives away Randall's cloaking abilities by trying to throw a snowball at Sulley, allowing him to knock Randall off him by punching him in the face. After Sulley, Mike, and Boo escape, Mr. Waternoose tells Randall to get up and that there cannot be any witnesses to the plan. Randall sinisterly replies that there will not be (implying that he intends to betray and kill Mr. Waternoose afterwards if the plan works).

While Sulley and Mike lead Randall on a wild chase through a large chamber where thousands of doors to the human world are kept, Mr. Waternoose rallies the CDA to capture Sulley, Mike (both of whom he considers the criminal responsible for the chaos), and Boo.

After Sulley defeats Randall and returns to Scare Floor F with Mike and Boo, Mike distracts the CDA by driving them away while Mr. Waternoose catches sight of Boo with Sulley and chases them into a simulation room, yelling at Sulley to give him Boo.

Mr. Waternoose breaks into a room where Sulley has went into and confronts him, declaring he will kidnap a thousand children for Randall before letting the company die and he will silence anyone who gets in his way. Violently knocking Sulley out of his way, he tries to grab Boo from the bed, but instead grabs the simulation child. Just then, the wall goes up to reveal that Mike is behind the controls. Mike, who has recorded the confrontation between Sulley and Mr. Waternoose, plays back his favorite part to reveal Randall's nefarious scheme to the CDA as Mr. Waternoose watches in bewilderment. With this incriminating evidence, the CDA turns on Waternoose and arrests him. As he is being dragged away, Mr. Waternoose angrily blames Sulley for foiling Randall's plan, thus destroying the company and making the energy crisis worse since there is no other way to get scream energy. Sulley and Mike seem to accept this until Mike tells Sulley that he should have seen the look on Waternoose's face and mentions they have had some laughs; this inspires Sulley, based on their experience with Boo. Laughter is proven to be 10 times more powerful than screams as Monsters, Inc. comes back on top with Sulley as the new CEO, averting the crisis and proving Mr. Waternoose wrong.

Mr. Waternoose isn't physically seen at any point in Monsters University aside from a picture in the montage near the end showing Sulley and Mike gaining promotions in Monsters, Inc. and shaking hands with him. In the picture, he has facial hair and an afro, which he lost prior to the events of Monsters, Inc.

While Mr. Waternoose doesn't physically appear in Monsters at Work, he is mentioned a few times, most notably when Tylor Tuskmon recieves an invitation to join the company from him in the opening of "Welcome to Monsters, Incorporated". His image is shown on a now-outdated orientation film, to which Mr. Crummyham states he is no longer CEO and is "headed off to the big house". Sulley takes his place as CEO of the company.

Mr. Waternoose is a friendly, intelligent, caring, sophisticated monster and has a gentle, fatherly demeanor, especially with Sulley.

Afterwards in the first film, he is only driven to villainy and greed out of extreme stress, frustration, and desperation to keep Monsters, Inc. afloat in the midst of the energy crisis. Waternoose becomes more villainous as this drive and desperation strips away his morals and he is determined to not let anything stop what he thinks will be the best way for the company to keep going, never taking into account looking for other energy resources.

As well, he reveals that he is actually Randall's henchman as he regrets banishing Sulley and Mike, telling Randall that because of him, he was forced to carry his orders (as well as stating that Sulley is "twice the scarer Randall will ever be").

Flint: "And leaving the door open is the worst mistake any employee can make because...?"
Bile: "Um...it could let in a draft?"
Waternoose: "It could let in a child!"
Flint: "Oh! Mr. Waternoose!"
Waternoose: "There is nothing more toxic or deadly than a human child. A single touch could kill you! Leave a door open, and a child could walk right into this factory, right into the monster world!"
—Waternoose explains how dangerous a mistake from leaving a door open can be

"Our city is counting on you to collect those children's screams. Without scream, we have no power. Yes, it's dangerous work, and that's why I need you to be at your best. I need scarers who are confident, tenacious, tough, intimidating. I need scarers like... like... James P. Sullivan."
—Waternoose's desire

"Kids these days. They just don't get scared like they used to."
—Waternoose's statement on kids becoming sensitized

Waternoose: "James, this company has been in my family for three generations. I would do anything to keep it from going under."
Sulley: "So would I, sir."
Waternoose: "Say, I could use your help with something."
Sulley: "Anything, sir."
Waternoose: "You see, we've recently hired some new recruits, and frankly, they're... um..."
Sulley: "Inexperienced?"
Waternoose: "Oh, they stink!"
Sulley: "Uh-huh."
Waternoose: "I thought maybe you might come by tomorrow and give them a demonstration. Show them what it takes to be a top scarer, huh?"
Sulley: "I'll start out with the old Waternoose Jump-and-Growl. [He jumps and growls]"
Waternoose: "Ha! Oh! Oh, yes. Now, that's my boy."
—Waternoose and Sulley

Waternoose: "Well, hello, little one. Where did you come from?"
Sulley: "Mr. Waternoose!"
Waternoose: "Ah! James! Is this one yours?"
Sulley: "Ah, actually, she's my, uh, cousin's sister's, uh, daughter, sir."
Mike: "Yeah. It's, uh, 'Bring an Obscure Relative to Work Day.'"
Waternoose: "Hmm, must have missed the memo."
—Waternoose, Sulley, and Mike, as Waternoose meets "Boo" in disguise

Waternoose: "Finally! I never shouldn't have trusted you with this. Because of you, I had to banish my Top Scarer!"
Randall: "Ah, with this machine, we won't need scarers. Besides, Sullivan got what he deserved."
Waternoose: "Sullivan was twice the scarer you'll ever be!"
—Waternoose and Randall, as the former regrets banishing Sulley

Waternoose: "This has gone far enough, James."
Sulley: "She's home now. Just leave her alone!"
Waternoose: "I can't do that! She's seen too much. You both have."
Sulley: "It doesn't have to be this way."
Waternoose: "I have no choice. Times have changed. Scaring isn't enough anymore."
Sulley: "But kidnapping children?"
Waternoose: "I'll kidnap a thousand children before I let this company die and I'll silence anyone who gets in my way!"
—Waternoose confronts Sulley in a simulation room

Mike: "Well, I don't know about the rest of you guys, but I spotted several big mistakes."
Waternoose: "But-but-but how-how did...? How did...?"
Mike: "You know what? Let's watch my favorite part again, shall we?"
Waternoose (on TV, repeating): "I'll kidnap a thousand children before I let this company die!"
—Mike repeats Waternoose's scheme on the TV

CDA: "I'll get him. All right, come with us, sir."
Waternoose: "What are you doing? Take your hands off me. You can't arrest me. I hope you're happy, Sullivan, you've destroyed this company; Monsters, Incorporated is dead! Where will everyone get their screams now? The energy crisis will only get worse because of you!!"
—Waternoose, as the CDA turns on him and takes him away

His cameo in Monsters University 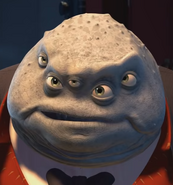