Oozma Kappa
Javier Rios is a member of the Roar Omega Roar fraternity.

Javier Rios is one of Johnny Worthington III's henchmen, and a member of Roar Omega Roar.

Javier's personality is that of a 'calm kid', usually seen as somebody who sits back and looks cool whilst everyone else including his fellow RΩR brothers are being loud. Whenever someone else is yelling or cracking jokes, he's just staying quiet.

Javier is also seemingly shown to get irritated with others frequently, particularly with rival fraternity Oozma Kappa. He even seems to actively dislike Sullivan, Javier being the one who snatches Sullivan's test out of his hands and seeming distinctly unimpressed with him and his grades, shaking his head and looking to Johnny as Sullivan leaves. He does not seem to share the same praise towards Sulley like the other members of Roar Omega Roar such as Johnny and Chet. Javier is also shown to be a good ping pong player, using his four arms as an advantage and smiling whilst playing. The fact Sulley broke the table in half during one of Javier's games could also be one of the reasons he is unimpressed by him at first.

Similarly, he also seems to have pride in his abilities like other members, evident as he is shown encouraging crowds to cheer for his team and cheering for himself at the end of Scare Games events. He is also shown posing in a gangster like manner for a photograph with the RΩR's and when Johnny states that real scarers look like his team. Additionally, Javier seemingly has no qualms about laughing at others who are put down, especially by Johnny, particularly if the insults are to make him and his friends look better. An example of this is when Sullivan states Mike doesn't really have a chance in the Scaring Programme and Javier briefly laughs, only for his straight-face to return moments later. He also takes part in the party prank, pressing the button which triggers the cannon which releases the glitter onto the members of OK. As well as this, he is shown talking to monsters whilst Johnny sells the papers.

However, apart from his somewhat deadpan disposition, Javier is shown smiling or laughing on certain occasions. He is shown to be smiling whilst playing ping-pong, taking part in the OK prank and even during his scare in the final Scare Games event. He laughs briefly when Johnny mentions that OK could always work in the mail room if they wanted to get into a scare company. In the teaser trailer, he is shown to be laughing and smiling with fellow monsters and additionally is the monster who shines the lamp on Mike, Javier also taking part in the partying. Nevertheless, this just could have been an earlier concept of his character.

Additionally, Javier has the ability to retreat into his shell, a prime example being when Mike and Sulley knock Dean Hardscrabble's scream cannister and it darts around the room, eventually towards RΩR.

Rather than making a sound or roar, his scare in the Games consisted of rattling with a snake like hissing sound. 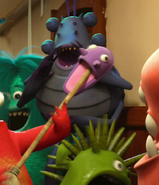 Javier in the Teaser Trailer 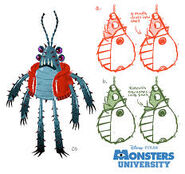 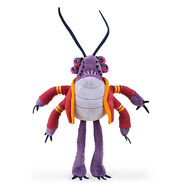 Add a photo to this gallery
Retrieved from "https://monstersinc.fandom.com/wiki/Javier_Rios?oldid=19306"
Community content is available under CC-BY-SA unless otherwise noted.