Jerry Slugworth is the floor manager for Monsters, Inc.

Jerry Slugworth is the supervisor of Scare Floor F at Monsters, Inc. where Sulley and Mike work and his job is to make sure everything is how it should be.

He first appears in a commercial for Monsters, Inc. that Mike and Sulley watch in their apartment room.

He counts down the amount of time left in seconds until it is time for the monsters to go into the human world to scare the children to harvest energy.

When George Sanderson exits a child's room with a sock attached to his back, Charlie alerts to Jerry, who rushes over to activate the alarm that summons the CDA. He also has seven fingers on each hand.

Jerry makes a brief appearance in Mike's New Car, where he is walking down the street when he sees Mike and Sulley fighting in the car, scaring him away.

Jerry is a tall, red monster with blue stripes in the center of the thick maroon stripes around his torso and legs, blue toenails, and seven fingers on each of his hands. He wears a black headset with a microphone on the left. On the ad sign, he wears a blue hard hat. 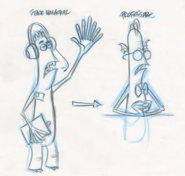 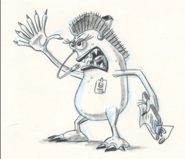 Add a photo to this gallery
Retrieved from "https://monstersinc.fandom.com/wiki/Jerry_Slugworth?oldid=20390"
Community content is available under CC-BY-SA unless otherwise noted.