Start a Wiki
Oozma Kappa, often shortened as OK, is one of the six fraternities of Monsters University and the main fraternity of the film.

A collection of wholesome, good-natured misfits, the adorable brothers of Oozma Kappa (OK) have bonded over their inability to make it through the Scaring Program. With only four bodies in the house, they don’t even have enough members to compete in the Scare Games. What they lack in scariness and self-confidence however, they make up for in heart.

In Monsters University, Team OK is first seen after Mike and Sulley help team Roar Omega Roar capture Archie the Scare Pig, and ROR recruiting Sulley as one of their frat members, where they are trying to sell cake, only to have a big monster eat every single slice. Later, at the Scare Game recruits following Mike and Sulley being kicked out of the Scaring Program by Dean Hardscrabble after she catches them both arguing and accidentally destroying her scream canister, Mike, as an attempt to participate in the Games so that he can get back into the Scaring Program, decides to join team OK, but Terry and Terri share a body and members are counted by bodies instead of heads. Sulley had to join OK as well so that their team can qualify. Mike and OK make a deal with Hardscrabble that if they win, then he and Sulley will be allowed back in the Scaring Program. But if they lose, then they and the rest of OK will have to leave Monsters University forever.

At the OK residence (actually Squishy's house), the OK members introduce themselves to Mike and Sulley and later have an initiation in the basement that night (only to be interrupted by the sudden appearance of Sheri, Squishy's mother), when they find out that the first round of the Scare Games, the Toxicity Challenge, is held at the university's sewers. The OK members try to race the other frats and sororities (including Roar Omega Roar) in the sewers while simultaneously attempting to avoid being hit by the toxic urchins that could make their bodies swell up. But since Mike and Sulley were constantly arguing, OK comes in last place (which would result in disqualification). But fortunately for them, JOX was caught cheating using an illegal protective gel and was disqualified again, thus allowing OK to continue.

In the second Scare Games round, Avoiding the Parent, team OK was trying to be as quiet as possible in the library so that the Librarian won't catch them as they try to retrieve their flag from the statue. However, Sulley accidentally makes a creak in the floorboard as he is climbing the ladder to the statue, and as a result, the Librarian notices him and tries to catch him. But the other OK members try to distract her by purposely making loud noises in the library from different directions while Squishy retrieves the flag unnoticed (and the Librarian to toss EEK out of the library instead). Later that night, team OK is invited to the ROR fraternity house for a party only for them to pull a prank on them by dumping paint, flowers, and stuffed animals on them and calling them "Cutema Kappa." Annoyed by ROR's prank, Mike decides to make OK go on a "field trip" to Monsters, Inc., to see what real scarers are like by taking Ms. Squibbles' car, only to be chased out of the factory grounds by several security guards.

With Mike as their coach, team OK now starts to work even harder and better when practicing for the rest of the Scare Games. Team OK manages to scare only the child cutouts in the maze in the "Don't Scare the Teen" event while avoiding the teen cutouts (which also revealed PNK's weakness, the fact that they want to scare everything, which the round prevents), and find new hiding places in the Hide and Sneak event (such as Mike disguising himself as a globe, Sulley as a bear rug, and Don Carlton using his tentacles to cling onto the ceiling) while avoiding a referee, who eliminates HSS due to their inability to hide, and even receive new shirts with their team name on them (and a new hat for Mike and armbands for Art).

Finally, OK is faced against ROR in the final round of the Scare Games, inside the scare simulators, where the two teams had to scare the child dummies as hard as possible as the dummies are set to the highest difficulty level (such as Terry and Terri scaring by disguising themselves as an adult human by aligning their heads, arms and tentacles; and Squishy scaring by simply taking the dummy by disguise, and Sulley's roar humiliating Randall and causing him to become a villain). Team OK wins, but Mike finds out that they cheated because Sulley secretly tampered with the dummy's controls so that Mike's setting was on "easy." Enraged, Mike sneaks into the door lab where he tries to scare human girls in a door leading to a cabin in a forest but fails in the process. Seeing that Mike is in danger, the other OK members try to distract the security guards while Sulley breaks into the door Mike was in, and after they manage to escape by scaring adults instead of children, Dean Hardscrabble expels both Mike and Sulley but lets the other OK members back in. As Mike and Sulley are about to leave MU forever, Don reveals to them that he and Sheri are engaged. It's then revealed at the end of the film that after the rest of OK graduate from the university, they start working at Monsters, Inc. like Mike and Sulley. 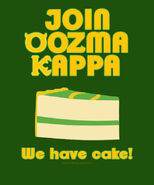 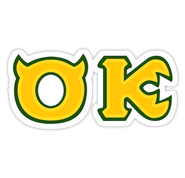 Add a photo to this gallery
Retrieved from "https://monstersinc.fandom.com/wiki/Oozma_Kappa?oldid=20077"
Community content is available under CC-BY-SA unless otherwise noted.