Claws Ward is a scarer at Monsters, Inc.

Claws is a blue crocodile-like monster with razor-sharp claws and horrifying breath. He is very good friends with Lanky Schmidt and George Sanderson.

In Monsters, Inc., Claws appears on the Scare Floor in Monsters, Inc. and the sushi restaurant. On the Scare Floor, he runs out of a door screaming because the child he was trying to scare almost touched him. He then proceeds to cry while his assistant calls in a door shredder, making that door the 58th lost in the week. While watching Mike's company play Put That Thing Back Where It Came From Or So Help Me, he gets emotional during Mike's singing and starts crying, to which his assistant slaps him and says, "Keep it together, man!" (like how he did earlier in the film when Claws was crying because the kid got close to him).

Claws's personal is much like the other employees at Monsters, Inc., as he is a serious worker that acts tough and has a large amount of self-confidence. However, Claws' emotions can get in the way of this sometimes, and he is often insecure with controlling his moods.

Claws has a blue skin tone, with four long nails on each of his hands. He also has tentacles for arms. 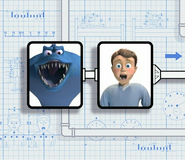 Claws scares with a dinosaur roar the Fake Child in the Monsters, Inc. commercial 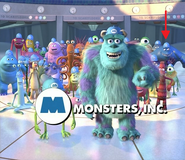 Claws in the Monsters, Inc. commercial

Claws crying because he almost got touched by the kid

Claws with Lanky Schmidt as Mike runs down the hall

Claws in the audience with Sulley on stage

Claws getting emotional over Mike's singing

Add a photo to this gallery
Retrieved from "https://monstersinc.fandom.com/wiki/Pete_Ward?oldid=19804"
Community content is available under CC-BY-SA unless otherwise noted.