Oozma Kappa
Reggie Jacobs is a member of the Roar Omega Roar fraternity.

Reggie Jacobs is one of Johnny Worthington III's henchmen and a member of Roar Omega Roar.

Reggie has minor appearances through Monsters University, with the first being when Johnny Worthington III and Chet Alexander introduce themselves to James P. Sullivan. Then, he appears in the second party, when the Roar Omega Roar members humiliate the Oozma Kappa members. Finally, at the final event of the Scare Games, he is beaten by Don Carlton at the scare simulator.

He is a dark green monster with three eyes and grass-like hair all over him. 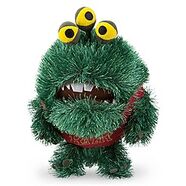 Add a photo to this gallery
Retrieved from "https://monstersinc.fandom.com/wiki/Reggie_Jacobs?oldid=19307"
Community content is available under CC-BY-SA unless otherwise noted.