Zack
Ricky Plesuski is a green monster that works at Monsters, Inc. as a laugh collector.

Plesuski attended Fear Tech, where he majored in under-the-bed studies and minored in canine imitation. He worked at Fear Co. and Scream Industries for three and two years, respectively, before acquiring his current occupation at Monsters, Inc.[1]

Ricky was featured in a Monsters, Inc. commercial, in which he was among the scarers that briefly flashed on the screen during an explanation of how Monstropolis' energy was collected. He was also present during the staff shot at the end of the advert.

Plesuski was working at Monsters, Inc. during the breakout of a human child in Monstropolis. In the hours before her entry, Ricky was working on Scare Floor F, working alongside his assistant Zack to collect enough energy to fill as much Scare Canisters as possible. At this time, Plesuski was ranked ninth on the Scarer's Leaderboard, with a total of 55,735 points.

Once the CDA had managed to regain peace in Monstropolis and return Boo back to her home in the human world, James P. Sullivan and Mike Wazowski changed Scare Floor F into a laugh collecting room, and Plesuski's job was changed accordingly.

Plesuski was among those who received a Scare Card, which detailed his career history, as well as records and personal information.

Ricky is a very short monster, standing at only 2'6", and weighing 357 pounds.[1] He has a very large mouth, as well as eight short legs, but no arms. Boasting lime green skin, Ricky also has two round, blue eyes, as well a set of sharp teeth, which he utilizes in his profession.

The scarers of Scare Floor F, as well as Mike Wazowski 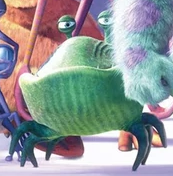 Close up to Ricky Plesuski. 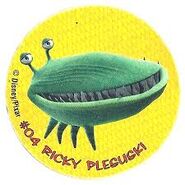 Retrieved from "https://monstersinc.fandom.com/wiki/Ricky_Plesuski?oldid=19880"
Community content is available under CC-BY-SA unless otherwise noted.