Roar Omega Roar, often shortened as RΩR, is one of the six fraternities of Monsters University. It is the rival fraternity of OK (Oozma Kappa).

The Roar Omega Roar (RΩR) fraternity is made up of the best of the best. They’re the smartest, most skilled, scariest monsters at Monsters University, and come from families with a long, proud history of Scaring. While the RΩRs may be preppy in dress, they are ferocious in action and downright ruthless, if necessary. Self-declared as the most elite house on campus, the RΩRs are led by Johnny Worthington who presides over the house like an all-powerful monarch. Eager to continue their Scare Games winning streak, the RΩRs will do whatever it takes to stay on top.

An aisle in the RΩR house complete with portraits

Sketch of the RΩR house exterior 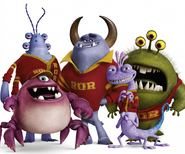 Sulley with the RΩRs
Community content is available under CC-BY-SA unless otherwise noted.
Advertisement