Phlegm (by his friends)
Mr. Bile (by Flint)

Bile is a rather clumsy cowardly monster who often messes up during both real scaring and simulation scaring. Thaddeus struggles with his test simulations, leaving a door open and utterly botching his attempt to frighten the mechanical child. He is accident-prone and a bit of a coward. In one of the simulations, Bile scared the child and it screamed, making him jump backwards screaming, trip over a soccer ball and land on a bunch of sharp jacks. He is later seen collecting laughs, which he can successfully do with his routine of tripping and falling.

He is seen sitting in front of the Sushi Chef at Harryhausen's on the night Mike takes Celia to the restaurant for her birthday dinner.

At the end of the film, he is seen returning to the Laugh Floor from a child's room, and he seems to have successfully made that child laugh as the energy canister had filled up.

He also appears in the company play Put That Thing Back Where It Came From Or So Help Me, portraying the Sushi Chef during the restaurant scene, as well as singing with the rest of the cast at the play's finale.

Bile is friendly, easy-going, clumsy, timid, and accident-prone and messes up during his simulations.

Bile has blue and purple skin, with spikes on his head a tail. 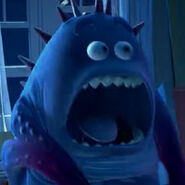 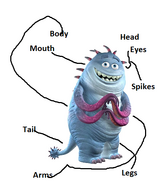 Add a photo to this gallery
Retrieved from "https://monstersinc.fandom.com/wiki/Thaddeus_Bile?oldid=19883"
Community content is available under CC-BY-SA unless otherwise noted.